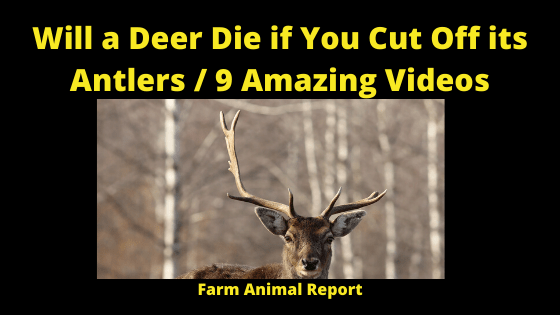 Does it Hurt to Cut Deer Antlers?

On Average Deer, antlers are honeycombed bone tissue. When the rut is ending, bucks’ testosterone goes way down which makes them shed their large bones in order to prepare for winter when food becomes scarce and they can no longer maintain themselves with hormones alone but this also means that over time you’ll see more females than males around!

During mating season or during times where it may seem like all deer species have gathered together at one spot for some unknown reason (such as December), farmers will often take advantage by doing what we call “horn management.” Does it Hurt to Cut Deer Antlers

This practice cuts down on injuries from buck fighting since there aren’t any fights happening between these weakened animals anymore – instead, our attentions turn toward keeping

Will a Deer Die if You Cut Off its Antlers? Antlers on deer grow every year, beginning in early spring and through the summer. Once matured and full-sized, they harden into bone-like structures in late summer/autumn, and are shed (naturally fall off) every year in late winter.

Then the cycle begins again. If the antlers are cut off at any time during their growing period, the deer will not die but it must be done with a local anesthetic to be at all humane since they are highly enervated and are very sensitive to any touch. Does it Hurt Deer to cut Antlers

Once they have been cut off, a bone wax or other type of hemostatic substance should be put on the cut stump to stanch the moderate bleeding. At this point, the animal, once released, runs off, the major suffering coming from loss of social status if there are other males around with antlers.

The Life Cycle of Antlers

All deer species shed their antlers in winter, after a sustained drop in testosterone ends their life cycle. Several months later, the animals regrow their antlers from spring through late summer. The antlers start as nubs in April and reach their full potential by August.

During summer, antlers look fuzzy while growing beneath a “velvet” skin that carries nutrient-rich blood to these bones. At that stage, antlers are soft to the touch and easily damaged. Antlers harden in late summer and then shed their velvet once they quit growing. The velvet dries and falls away when its blood supply ends.

Bucks often hasten the process by rubbing their antlers against Trees or brushes, possibly because the dying velvet causes an itching sensation. The new antlers are usually complete by early September, well before the rut, the deer family’s breeding season.

You can monitor this months-long process by deploying trail cameras, which provide a fun way to learn about deer in your area. Trail cameras are motion-activated, and take pictures when deer or other woodland creatures trigger their sensors.

These devices are available at archery stores. Meanwhile, bucks and bulls continually rub their antlers during early fall to work off aggression while strengthening their necks for sparring with each other during the rut. Rubbing is often likened to boxers hitting a punching bag to prepare for fights. Before and during the rut, sparring matches sometimes lead to all-out battles, even deathmatches.

These sparring sessions establish a pecking order, with the most dominant bucks and bulls earning and defending breeding rights. These contests are likely the main reason male deer grow antlers.

How to Cut Deer Antlers?

We need to understand the type of animal we are raising. The bucks, in reality, turn into unpredictable roaming, fighting, and killing machines, prior to, during, and for a period, after the rut.

If one was to learn the number of bucks that die in the wild due to fighting, one would be shocked. I’m convinced the numbers are staggering.

These animals carry weapons on their heads that are triggered by testosterone. We all know how explosive and unpredictable that can be. Mother Nature has made it that way to preserve the strength in the genetic pool.

Why Cutting Off Antlers / Herd Protection

There is no way a man will ever, or should ever attempt to, breed this instinct out of these animals. Fighting is all about dominancy within the pecking order. It is impossible for anyone to know which bucks to keep apart! Disarming these critters of their deadly weapons is the only safe way. Cutting is proving to be a smart management decision ad most deer farmers in Alberta have realized.

Another good reason for cutting is that this procedure allows you to be able to match the antlers to the buck without having to go and search them in the pastures and then use DNA. This is very important when keeping antler growth records for management and marketing purposes.

Who Should Cut Antlers?

Anyone growing whitetail bucks in groups for supplying hunting preserves and breeding stock markets should be cutting off the antlers. But they should NOT be doing it if they do not have a proper farm layout with good handling facilities and the expertise to do the job.

The task should not be attempted with any of the above components missing. It is important to keep the level of stress in these animals as low as possible. This can only be accomplished if the task is performed safely, efficiently, and within the least amount of time.

Antlers should only be cut by a veterinarian, or a trained Experienced Deer Farmer.

When Should Antlers be Cut?

The best time to start cutting antlers is when approximately 60% to 70% of the bucks in the group have scraped their antlers clean. The dates will vary slightly from year to year and even from pen to pen. Over the years we have found that between August 20th and September 10th is the optimum time.

If the temperatures tend to be too hot, we start very early in the morning and only work until mid-morning. This is a time in summer when bucks are still mostly in their bachelor camaraderie mood. It is also a good time of year when daylight hours haven’t shortened enough to kick-start their testosterone factory.

This makes them less aggressive towards each other. We like to use cutting cables to saw off hard dry antler only. The two main reasons for this is a hard dry clean antler has more value and the cutting cables will not clog up with blood. If a buck still has its antler covered with velvet, take time to grab ahold of the main beam with your bare hands just above the burr.

If you can feel the heat, it means blood is still flowing – this buck is not ready to cut. Bucks that are not ready get sent to a different pen and brought back for cutting in a week or two.

Which Bucks to Cut?

All bucks from yearlings and older ones being kept in groups, which do not require their antlers for marketing reasons, should be cut. The exceptions could be breeder bucks in single-sire breeding situations that you know are not aggressive towards does, and bucks in individual pens that are not adjacent to each other.

Where to Cut Antlers?

The best place to cut is as close above the burr as possible. It is also possible for many animals to cut below the burr if one is careful and the burr is not too close to the skull. Below the burr is often desired when antlers are to be entered in competitions, mounted for trophies, or simply for increasing their market value.

How to Solve Buck Fighting?

There are only four ways I know of to solve buck fights:

Whitetails are probably the most aggressive fighters of all the deer species. That is why serious deer farmers who want to reduce their losses to improve their bottom line should be cutting off the antlers.

previousWhy do Deer Bleed when they shed Their Antlers? Deer Shedding Velvet
next5 Reasons: Why do Goats Pee on Themselves / Romance