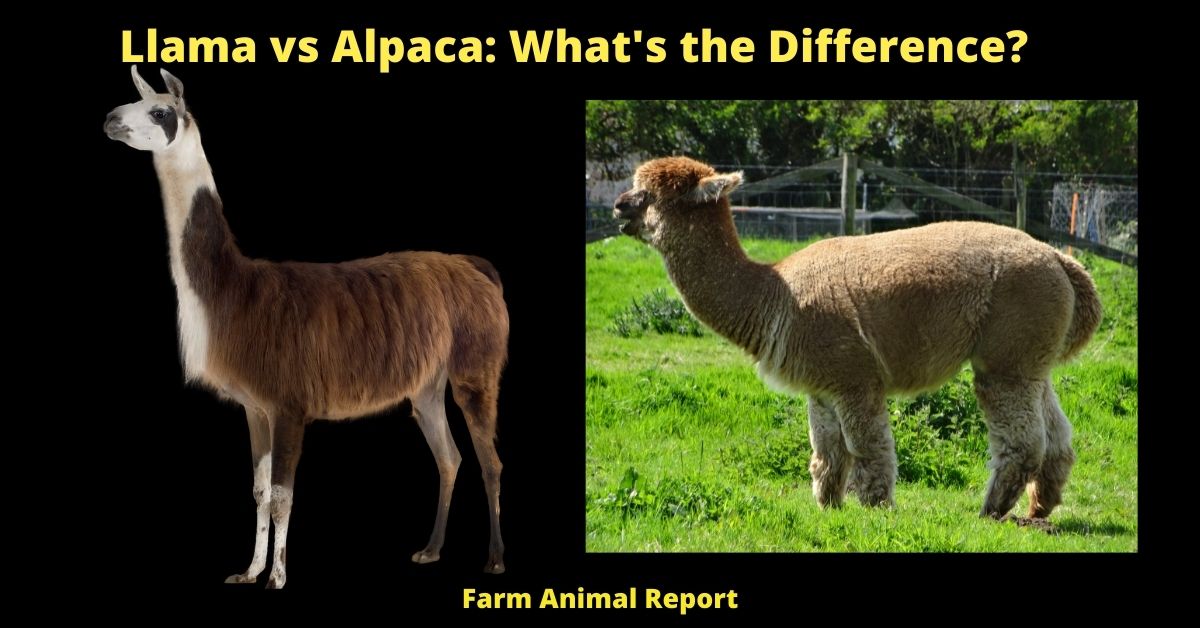 The main difference between alpacas and llamas are their size, their hair, and their face shapes. … Their faces are also dissimilar: alpacas have small, blunt faces with short ears, while llamas have more-elongated faces with banana-sized ears. Another key difference is their hair. Llama Hair is course and Alpaca Hair is much finer.

Llama vs Alpaca: What’s the Difference?

Over the course of many thousand years, humanity has relied on llamas and other alpacas for transportation and fiber production. Both species are found predominantly in Peru and Bolivia, and they are members of the Camelidae family, which includes camels. Alpacas and llamas are two of the four most common lamoid species; the other two species, the Vicugna and the Guanaco are wild relatives of the domesticated alpacas and llamas. It’s interesting to note that all four species can interbreed and produce fruitful offspring. Even though they are sometimes confused, alpacas and llamas are distinct animals in several essential aspects.  Llama vs Alpaca: What’s the Difference?

An alpaca is a South American animal that has been domesticated. Lama pacos is another name for this ruminant, which is a mammal with cloven hooves and a cud-chewing habit.

Despite their close association with the camel family, alpacas do not have distinctive humps. Instead, they are slim and covered in a smooth, silky layer of fleece. They are highly prized for their fleece, which is spun into cloth or yarn because it is lightweight and robust while also providing excellent insulation.

Alpaca can also refer to the particular fleece derived from their hair, which is a glossy, mostly black woolen fabric with a cotton warp that is frequently used in clothing.

In English, the earliest known usage of the term alpaca goes back to circa 1805–15, and the name is derived from the Spanish word alpaca. It is thought to derive from allpaqa, an Aymara name used by Indigenous people living in mountainous parts of Bolivia and Peru to refer to the animal, which is also linked to the Quechua p’ake (“yellowish-red”).

Llamas, like alpacas, are members of the lamoid family and are closely related to camels in terms of genetics. However, they have coarse fleece, which is regarded as less attractive than the wool produced by alpacas.

The first recorded usage of the word llama in English was about 1590–1600. It derives from the animal’s Spanish name, llama, which was itself derived from the Quechua term llama by Spanish colonial explorers and settlers.

Aside from their size, the most noticeable morphological distinctions between alpacas and llamas are their hair texture and the form of their faces. Additionally, their dispositions differ, which has an impact on the way people have used them throughout history.

Where are Llamas From?

The llama (Lama Glama) is the biggest domesticated camelid found in South America. Because of this, they have been widely used as pack animals and as a source of meat in the Andes from the Pre-Columbian period. Llamas are native to the highlands of Peru, Chile, Argentina, and Bolivia, and they are used for transportation.

Alpacas are indigenous to South America and descended from the wild Vicuna, which the International Union of Conservation has classified as a vulnerable or endangered species. The llama is derived from the wild Guanaco, which is still relatively abundant in most of South America. They are both considered to be members of the camelid family, which also includes the Asian camel and numerous other camel species.

Alpacas have been domesticated for more than 9500 years, and they have been critical to the Andean people’s survival and economic well-being. The Incas of South America began using alpacas and llamas for several uses in the early 14th century, including food, fuel, clothing, transportation, and religious ceremonies, demonstrating the animals’ adaptability as a source of food fuel, clothing, and transportation. Alpacas were an essential resource for indigenous people and were closely regulated by the government and Incan royalty to prevent them from being produced or transferred without authorization.

Llamas and alpacas flourished throughout this time period, reaching a population size of more than 40 million animals by the late twentieth century. Alpacas were driven into the Andes Mountains immediately following the Spanish invasion of South America in 1532, where the Spanish invaders killed them.

The latter wiped out almost all of the remaining alpaca population (98 percent). Allowing llamas and alpacas to breed resulted in the species evolving from a single-coated creature to the two-coated creature it is today. Alpaca and llama breeding programs are increasingly focusing on enhancing animal quality by breeding back to their pre-Spanish ancestors. This is done to improve the animals’ general health and well-being.

Can Llama and Alpaca Breeds?

According to the experts, alpacas and llamas may (and do) effectively cross-breed. The resulting pups are known as huarizo, and while they have no “actual use,” they frequently have sweet temperaments and are appropriate for keeping as pets.

Differences between Llamas and Alpacas

There are numerous differences between Llamas and Alpacas, all of which are given below.

The size disparity between the two species is the most visible distinction between them. Alpacas are tiny animals, standing roughly 91 cm (35.5 inches) high at the shoulder and weighing between 56 and 66 kilograms (122 to 144 pounds). Llamas are the largest of the lamoid species, measuring around 121 cm (47.5 inches) at the shoulder and weighing approximately 114 kg (252 pounds). As a result, llamas will be far larger than their cousins. Llamas and alpacas have quite different facial features, too, i.e., alpacas have tiny, blunt cheeks with short ears, while llamas have elongated faces with ears the size of bananas.

Llamas have a longer face, but an alpaca’s face is a bit more blunt, giving them the appearance of being “smooshed in.” Finally,  Alpaca ears are spear-shaped, but llama ears are significantly longer and banana-shaped, as can be seen in the photo.

Like cows, llamas feed on grass and chew their food, which they regurgitate and chew as cud. They bite on such wads for a short period of time before swallowing them to ensure thorough digestion of the food they consume. They may survive by consuming various plants and need minimal water in their lives.

Whereas Alpacas, as herbivores, consume vegetation material exclusively. They primarily consume grass, although they may also consume other plant materials such as leaves, wood, bark, and stems. Alpacas have a three-chambered stomach, similar to that of other ruminants, which allows them to digest roughage efficiently. In contrast to other grazers, Alpacas do not consume a large amount of food.

Typically found in southeastern or northern Bolivia, alpacas are bred for their fleece, and some are used for meat production.

On the other hand, Llamas are domesticated mammals native to South America, and they may be found in Peru, Bolivia, Ecuador, Chile, and Argentina.

Alpacas have an average life span of 15–18 years,  while the lifespan of a llama is 20 years.

Llamas and alpacas spit in the same way and for a variety of similar reasons. Females of both species use this behavior to communicate to males that she is not interested in their approaches, and it is also used by both genders to keep competitors away from food sources. Additionally, spitting might be employed to scare away an attacker.

Some llamas and alpacas are grumpier than others, and they will spit even when they are not provoked. However, most of them typically offer a reasonable amount of notice before unleashing their whole armament.

It is possible that they may lift their chin and flatten their ears back and that they will threaten in this manner. Then, if the animal towards whom they are targeting their behavior doesn’t notice it, they will blow some air and saliva into the air to alert it. Additionally, it emits a bit of “pfffffpth” noise.

Both Llamas and Alpacas will vomit their stomach contents and spit them up to 10-feet away if the offended party does not comply with the warning and back off. Fortunately for the animals, their triumphant moment is short-lived because the gastrointestinal muck isn’t nice for them, either.

Another significant distinction is their hair/fleeces. Alpacas have shaggy/long hair that is used in the creation of alpaca fleece. Their hair color can range from white and light yellows to blacks and browns. While Llamas have rougher hair and their wool is regarded inferior, llama breeders strive to develop a llama breed with finer, softer hair.

Llamas and Alpacas are commonly used as pack animals by humans because they can carry a significant amount of weight. Llamas can carry up to 40 – 60 kg (90 to 132 pounds) of weight for distances of up to 31 km (19 miles) each day. On the other hand, Llamas have a negative reputation because, when they are overworked or mistreated, they react by spitting, kicking, lying down, or refusing to move. Generally speaking, though, they are kind and gentle creatures. On the other hand, Alpacas are a little more reserved and like to remain with their group of friends. Llamas may be employed as guard animals for livestock such as alpacas and sheep, and they can be trained to do so.

Llamas and alpacas both serve a useful role in assisting families in getting out of poverty, which is a little-known fact. As a result of these animals’ resilience in harsh climates, quality fiber, and benign nature on the environment, raising alpaca and llama herds can assist vulnerable communities in earning a livable wage.