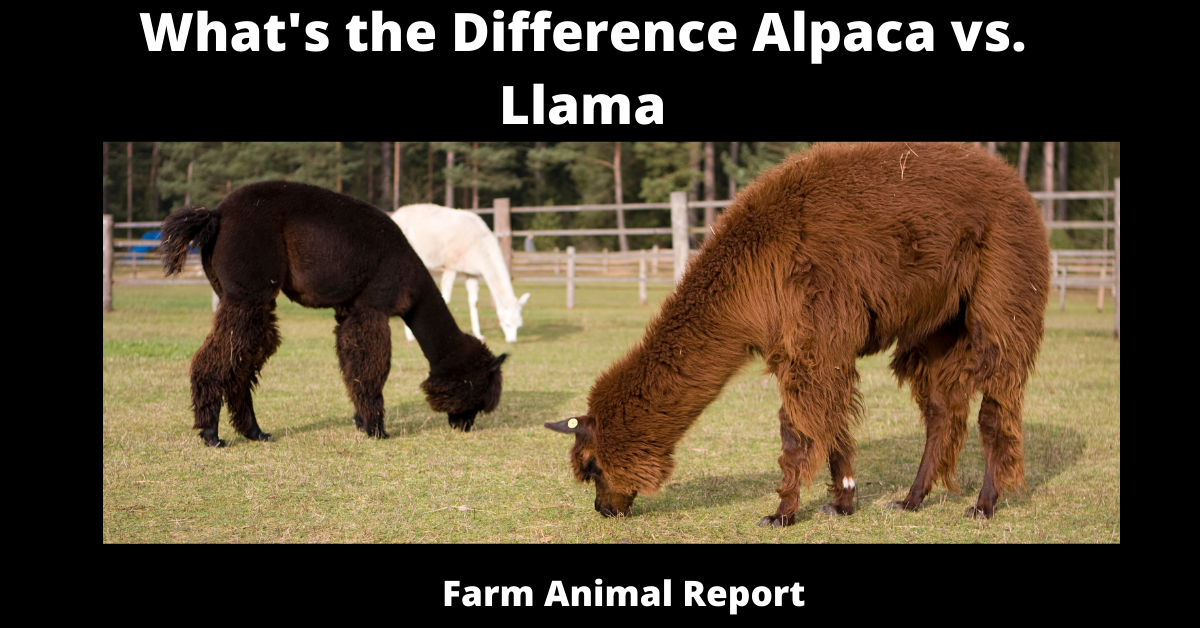 The Main Difference between Alpacas are smaller than Llamas and llamas are substantially larger than alpacas and can weigh up to 400 pounds at their full maturity. Alpacas are way smaller than llamas, weighing between 125 and 150 pounds in most cases. Alpacas have adorable, blunt-nosed faces that are generally covered in a thick layer of fur. Llamas have longer noses and much less fur on their faces than llamas. Alpacas have straight, pointed ears, but llamas have long banana-shaped ears, which are more common in South America.

What’s the Difference Alpaca vs. Llama

What’s the Difference Alpaca vs. Llama? We’re frequently asked the difference between alpacas and llamas, and we’re happy to explain. Llamas and alpacas are both camelids native to South America, and while they are related, they are not the same animal. In addition to these camelids, there are also Vicunas and Guanacos found in South America, but we’ll be concentrating on Alpacas and Llamas for the sake of this article. These handsome animals are South American camelids.

How Can you Tell the Difference between Alpacas and Llamas?

Listed here are eight simple ways to recognize the difference between an Alpaca and a Llama.

It is recommended that you consider owning domesticated animals as llama as your primary animal companion. Llamas are considerably calmer and gentler animals than alpacas, which makes them a better choice for children. Because these are herd animals, it is recommended that you have at least two of them. This is especially true for alpacas; however, other hooved animals can also be used as llama companions, such as goats and sheep.

Do Llamas or Alpacas spit? Or Do Alpacas Spit like Llamas?

Yes, because llamas (pack animals) and alpacas are distantly related to camels, they spit, but differently from regular camels, spit when irritated or threatened. Alpacas, like llamas, spit as well. They only spit when they are agitated.

Why do Alpacas Spit at you?

It is possible that they will lift their chin and flatten their ears back and that they will threaten in this manner. Then, if the animal towards whom they are targeting their behavior doesn’t notice it, they will blow some air and saliva into the air to alert it. A slight “puffeth” noise is produced as well.”

It will vomit its stomach contents and spit them up to 10-feet away if the offended party does not comply with the warning and back off. Fortunately for the animals, their triumphant moment is short-lived because the gastrointestinal muck isn’t pleasant for them, either.

They are unable to handle the taste of it at all! They’ll sit there with their jaws wide and their ears at half-mast as if they’re mocking you. It’s rather amusing! So their mouth is hanging open, the green stuff is dripping from it, and they appear to have had their mouth washed out with soap. Some will roam around, looking for something like a breath mint or a lovely leaf, to attempt to get the taste out of their mouth, while others will sit and watch television. “Ah, why did I do that,” they’ll think for a few minutes as they ponder their actions.

The majority of llamas and alpacas do not spit on humans. Keep eye contact with them, but avoid making them feel threatened if their ears are pushed back, and they’re glaring at you.

Are Llamas or Alpacas more Aggressive?

The belief that llamas and alpacas are hostile is yet another popular fallacy. Alpacas and llamas are individuals with distinct personalities, much like people. Some are calm and quite relaxed back, but others are loud and interested in their approach. Generally speaking, they are placid creatures that thrive in a herd environment.

Spitting is generally observed between alpaca herdmates to demonstrate dominance, but it is only seldom exhibited against humans unless encouraged. Llamas are believed to be significantly more aggressive than other animals, and they have been known to spit at people passing by.

Alpacas and llamas are relatively simple animals to care for. The acreage and feeding requirements for them are lower than those for other farm animals. Consider that one acre of land can support 5-10 alpacas or four llamas, depending on the quality and quantity of available pasture. In the sense that they trim the grass rather than eradicating it, Grazers are relatively easy to “walk” around the field itself because of their pads and toenails. Annual vaccines, worming, toenail trimming, and shearing are all part of a routine health checkup for your dog.

Do Alpacas and Llamas have Tails?

Yes, they are both equipped with tails. Their tails are utilized for communicating their feelings to one another. If they are annoyed by something, they will twitch their body back and forth to get rid of it. It is common for animals to raise their tails over their bodies and crouch down when they are submissive.

Should I get a Llama or an Alpaca?

Because alpacas and llamas (pack animals) have a similar appearance, it is no wonder that they are sometimes confused with one another. However, there are gigantic differences between the two animals.

Their physical characteristics, such as height, weight, and facial features, are distinct. They each have their own sole personalities as well. You’ll find that llamas are more protective of other animals than other animals are of them.

Even though they are from different species, alpacas and llamas can breed with each other and produce fertile offspring that are considerably more loved than their parent species because they inherit the dominant characteristics of both parents.

It has been discovered through advancements in inbreeding and genetic science that the crossbreeding of Alpaca and Llama produces a unique child that will have a llama-like head and a tall body similar to that of an alpaca.

The mixed baby born due to crossbreeding is a “mini-llama,” although the technical term for this cross is HUARIZO.

However, before breeding, both parents’ personalities and lifestyles are investigated to determine which characteristics the offspring will inherit. Alpacas and llamas are both endowed with distinct personalities of their own.

The offspring’s name is determined by the parents’ species, i.e., whether they are male or female.

The other terms  when referring to newborn babies (cria) are:

It is important to note that these crosses are regarded as unwanted in their respective home countries of Bolivia, Peru, and Chile and that this is a fact that should be remembered.

Huarizo is the most commonly used technical word to describe an alpaca-llama cross, as discussed above. There are numerous distinct characters in Huarizo, which helps to make it quite popular among the locals. To tell the difference Alpaca vs llama.

The most significant distinguishing characteristic of Huarizo is that they are often smaller than llamas, with their fiber being more extended than that of their parents.

The following are the characteristics of Huarizo:

Because its body size resembles alpacas more than llamas, the face appears to be familiar to llamas, although it is shorter than them.

Huarizo fiber is rougher in texture than that generated by alpacas (much finer fiber) and llamas. This huarizo thin fabric is a knitted fabric that is frequently combined with other fibers, such as polyester, to increase the overall quality of the cloth.

This animal’s primary source of fiber is the clothing business, which helps to make it a lovable creature to be around. The fleece produced by this fiber is utilized in the production of knitwear and other items.

Huarizo possesses a natural crimp, which means that it has a natural elasticity and is both breathable and warm due to its inherent elasticity.

The fascinating aspect of huarizo is the animal’s propensity for reproduction. Many people inquired as to whether huarizo was fertile. It is widely regarded as a sterile wild animal that is incapable of reproducing on its own.

Which Spits Alpaca or Llama?

They both spit. Their spitting behavior depends on their mating season, diet, and mood, as mentioned above.

Why are Llamas better than Alpacas? Points to tell the difference

Llamas are well-known for being good guard animals, although alpacas are a little more wary of strangers. Because of this, llamas are believed to be superior to alpacas. Some alpaca breeders keep llamas as a means of protecting their herds of alpacas. Because of their constancy and independence, llamas are also easier to train than other animals.

Alpaca and Llamas by the Numbers

Llamas first came to the United States in 1920, but it wasn’t until 1984 that the alpaca made its way to the country. As a result, the alpaca sector in the United States is considered underdeveloped at best. So far, I’ve discovered a diverse range of animals, ranging from pets to show animals, as well as a general sense of division between the older generation of alpaca farmers and the younger generation who are now arriving.

Alpacas tend to be concentrated in a few critical states, as well. The states with the highest numbers of registered alpacas are California, Washington, and Ohio. Older information on the internet will indicate that Michigan has a vast population; however, this is not true. There are slightly more than 8,000 registered alpacas in Michigan, accounting for only around 30 percent of Ohio’s 26,000 registered alpacas. Michigan’s alpaca farmers are expanding, and I anticipate that this number will continue to rise year after year.

Llamas and alpacas are sometimes misidentified as the same species, which is unsurprising given their similar appearance. They are so similar because they are both members of the camelid family, which also includes camels, who are their cousins in the eastern hemisphere. Alpacas and llamas are both native to South America.

In the Andes mountains of southeast America (Peru, Ecuador, and Bolivia), these domesticated western camelids developed many of the same adaptations to their cold, complex habitat that they did for their wild relatives. Both species have distinct physical qualities and personalities that distinguish them from one another; one is sweet-tempered, whereas the other may be a little salty; you’ll want to be able to differentiate between the two in case you ever come into one of these intriguing critters.