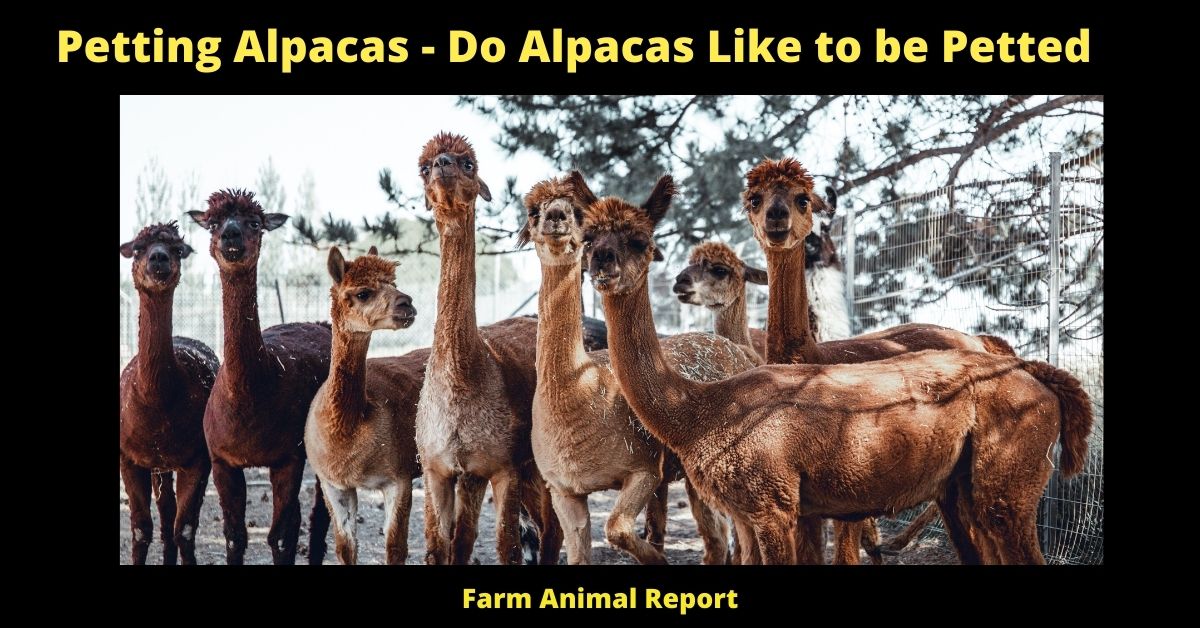 Generally speaking, alpacas do not want to be petted, yet they may tolerate it from certain individuals. It’s possible that an alpaca will even love being petted by a favored person or member of the family. Their early socialization will influence their response to other individuals. Always get consent from the Alpaca’s owner before petting them.

Fuzzy animals just tend to attract the attention of people who want to scratch behind their ears or pet them in general. But do livestock, such as Alpacas, enjoy being petted – or would they prefer to avoid the rubbing altogether? Continue reading to learn all about petting Alpacas. Petting Alpacas

How to Pet an Alpaca?

Most of the time, alpacas that have been reared properly should allow you to touch them in passing. However, they will not generally stay still to be petted, especially if unfamiliar with their behavior. Each Alpaca has its own personality, and some will respond more positively to being touched than others.

You can pet them while they are in close proximity to you. Alpacas cannot be petted in the same way as dogs and cats can because they do not tolerate being touched on the head or body. All you need to do is provide them with a comfortable, spacious environment as well as adequate nutrition. They will ultimately fall in love with you when you are with them. Petting Alpacas

Alpacas can and do appreciate being petted — provided they are accustomed to it and you, or at the very least other humans. Some alpacas, especially those who are at the zoo, are completely devoted to humans – or, at the very least, to the sweets that come their way.

Alpacas are traditionally regarded as livestock rather than as “pets.” Consequently, you will have a higher chance of receiving a “nose kiss” from an Alpaca than they will have of agreeing to be touched. Also, unlike dogs, alpacas do not typically respond to being called by their names, even though some owners claim to have trained their animals to do so!

According to experts, they are more similar to a cat in that they will nearly always come to you when it is feeding time, and though interested, they will just as readily walk away from you if they put their minds to doing so. ( They become accustomed to the noises of feeding time, whether it is the opening of a metal trash can lid containing the feed or the opening of a shed door.

Some alpacas enjoy being petted, and this is true sometimes

Alpacas are herd animals with a strong predatory instinct, which means they may be rather flighty if they are startled. According to Alpaca owners, if you can get an alpaca acclimated to human touch, interaction, and even your voice, they will be happier and calmer overall if they are engaged regularly

Aside from that, alpacas dislike being handled in any way, even being rubbed. Because they’re scared, these animals’ predatory instincts kick in. All of the following might happen at the same time for alpacas while they’re in this state of anxiety. Compared to other animals, alpacas’ reaction to being touched is more like that of a sheep.

Being motionless while being handled doesn’t always suggest that an alpaca is pleased with the experience. It’s actually the reverse if they’re completely still; it signifies that they’re terrified to death and are unable to move at all. They dislike being petted because they are afraid you may turn into a wolf and devour them.

What to Do When Alpacas Don’t Want to Be Touched?

If you sneak up on them and approach them too near, they’ll be much more enraged because it’s the way a predator would go about approaching them.

Please avoid utilizing the ninja-style stroking approach if you manage to sneak up on an alpaca. Despite the fact that you may be allowed to pet the unhappy creature, your actions will frighten it, making it more difficult for anybody else to approach it in the future. How to Approach an Alpaca?

Regardless of whether the Alpaca in question is yours or not, let’s speak about the right method to approach, talk to, and pet the Alpaca.

Ideally, if the Alpaca does not belong to you, you should first get permission from the owner. This is how they can let you know what Alpaca’s favorite method of interaction is. If the owner isn’t around, it’s best to stay on your side of the fence (or available). The alpacas are likely to feel safer with the barrier in place.

Then, be sure to watch out for any signs that have been put up and follow them. It’s critical to keep in mind that you are in a public place. It’s okay if the alpacas come up to you; they have the freedom to. Allow them to get a scent of you by holding out your hand. Try patting them on the back if everything goes smoothly.

If they begin to stutter or freeze, give them some room to breathe. In public, it’s important to speak softly and have acceptable body language, so don’t forget about it. As a result, the alpacas will see you as one of their own.

In most cases, the regulations still apply if you own the Alpaca, with the exception of the ones that deal with you being on someone else’s property. You own the farm where the Alpaca resides; thus, it’s part of your livestock.

In this case, give your Alpaca some time to adjust to your presence. Begin the process of familiarizing yourself with the people you’ll be meeting. Give them time to scent you out and then approach you. You should be gentle with them and give them some space before you start petting them.

Eventually, your alpacas will come to know and trust you. Your companionship and whatever touching you may provide them will be adored or at the very least tolerated after they’ve reached this stage.

The advantage of raising alpacas from an early age is that you will be better positioned to teach them to be comfortable with other humans.

How to tell if Alpaca is Receptive to Petting?

If they are responsive to petting, they may show affection by softly putting their noses to you — and they may briefly kiss or nuzzle specific persons. They also allow you to touch them without hesitation. Along with that, they take pleasure in their herd, and human family members remain close. In fact, alpacas can recognize human mates they haven’t seen in years.

How to Tell if Alpaca is Annoyed?

When alpacas become annoyed, they will bite, kick, or spit, as well as jump and make aggressive sounds. Alpacas are generally not violent animals. However, there have been reports of otherwise males turning a little insane or mad. When an animal (such as an alpaca) goes mad, it becomes violent against everything in its path of destruction. As a result, it will attack almost anybody or everything, and it will do it with little regard for prejudice or cause.

Kicking and biting are extremely individualized behaviors when it comes to engaging with people. Alpacas are generally quite sensitive around their hind legs and will automatically strike backward if they perceive a threat from behind them.

However, there are certain alpacas that are more prone to kicking than others, and these animals may be immediately identified.

Fortunately, because the Alpaca’s foot is a soft cushion, injuries to people are quite rare. If handled properly as young animals, most alpacas will react quite well to desensitization of the rear legs when given the opportunity.

Alpacas that bite people are exceedingly unusual, and it is not a widespread problem. Instead of being an attack, it is more often than not simply attention-seeking behavior on the part of spoiled dogs. Because alpacas, like most ruminants, have only one set of teeth and a hard pad, they nibble rather than chew.

Alpacas are known for their spitting, which is not particularly charming. It is one of the few defense systems an alpaca possesses, and it is a highly efficient deterrent against predators. The stuff is essentially regurgitated or freshly eaten grass, and it is easily removed as the grass dries. Due to its unique and sometimes foul odor, it is preferable to avoid becoming victims.

On the other hand, it is quite unusual for an alpaca to spit at humans. It is generally utilized in conjunction with other members of its herd as a pecking order mechanism. The most common reason for a human being to be hit by an alpaca is that the individual did not interpret the indications appropriately when stepping between two arguing alpacas.

Alpacas may be a fantastic addition to any backyard farm, but they each have their own personalities, hobbies, and eccentricities that must be taken into account. It’s a good idea to explore around and talk to alpaca farmers and ranchers to find someone who can be a helpful resource and help you choose the right animal for your backyard farm. Petting alpacas may be a relaxing and enjoyable pastime for you and your family if you build a relationship of trust with your alpacas.