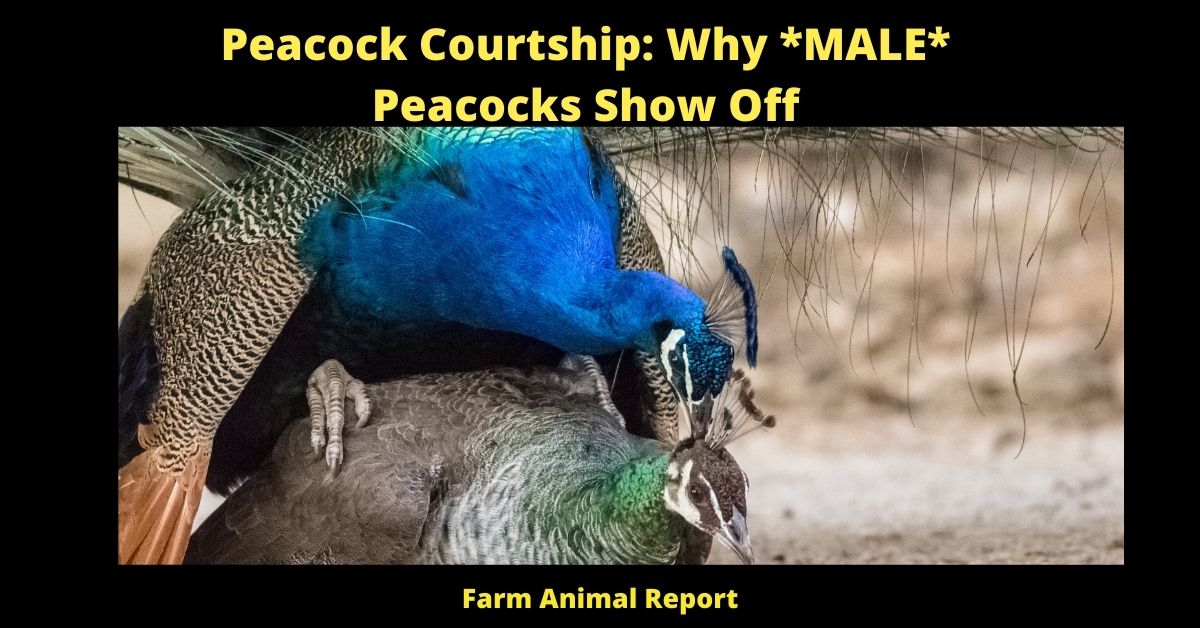 As a General Rule Peacock mating ritual consists of the male showing off his great-looking feathers to attract a female. The peahen on her part will pick out which of these males she wants and only accepts him as a mate if he has the best display around, that means all other peacocks in the vicinity better look out because their chances just got lower!

Peacock courtship is a mating ritual that occurs in the spring and summer. Male peacocks show off their feathers to attract females who will then choose which male they want to mate with. This post explains why female peacocks choose to show off by showing how these impressive displays can help them find a good partner, avoid predators, and get food.

What is Peacock Courtship?

Peacock courtship is a complex dance that begins with the peacock’s display of his tail. In case you didn’t know, male peafowl are known for their resplendent feathers, which makes them very popular in India where they live as well as among bird fans around the world. When it comes to this bird, however, it’s not all about the beauty of his feathers; female peafowl also plays a big role in peacock courtship.

One may wonder why is that? Well, given how much energy and resources males put into growing such beautiful tails makes them no less than an ornament themselves! So what does this mean for the female peafowl? It means that when it comes to mating, she too will use her beauty and this is what we call “peacock courtship” in science.

The dance begins with a male peacock showing off his tail feathers: he raises them up and spreads them out so as to make himself look bigger. Then, he starts jumping around and making noises to attract the female’s attention; after all, if she is not interested there won’t be any mating! At this point in peacock courtship, it’s up to the peahen (the scientific name for a female peafowl) whether or not she will mate with him. She may choose to mate with him or she can just walk away, and this is why it’s very important that the male gets her attention first!

How do Peacocks Court Females?

Peacocks court females by means of the show-off.

The peahens are not interested in fighting for territory, so they choose their mates based on good looks and the display of beautiful feathers. This is where the male’s role comes into play to impress his female counterpart with a flashy dance that includes fanning out its tail feathers.

The female peacocks choose which male they like most by the show of their tail, and this is where most males strive to be better than their adversary through its colorfulness and eye-catching pattern. The more vivid the colors are on a peafowl’s train (the group of feathers at the back end that forms a tail), the more attractive and healthy they are.

The whole peafowl species is known to be polygamous, which means that males usually have up to six or seven female mates at once. This makes for vibrant competition between peacocks trying to get their share of females in order to pass on their genes through reproduction.

Do Males fight in Competition for a Female?

The peacock has one of the most distinctive courtship displays known as “train-rattling”. Males shake their trains and produce an audible sound by scraping together serrated feathers located on the outer tail feather shafts. When courting females, males will spread their tails into a fan, and vibrate the feathers while he walks around her. If interested, she will join him in his display by raising her tail to form an inverted V-shape.

At first glance, it may appear that males are competing with each other for mates because they all have large eyespots on long ornamental tails relative to their body size. However, this is not the case. Males have similar numbers of eyespots and train length varies little among males despite other obvious differences in plumage coloration.

The peacock’s ornate display serves to attract females for mating purposes only–the female does not contribute or participate in parental care after eggs are laid and she typically abandons the male soon after mating.

How do Female Peacocks Show off to Males?

Peacock courtship is a dance where the male and female do a ritualistic mating dance. The males use their tails to show off, but females also utilize their movement as well. Females will fan out their tail feathers at certain stages of the ritual making them appear bigger than they really are, thus attracting more males. Males can be quite aggressive during the courtship process, so females must be able to take care of themselves. This ritualistic dance is a very important part of peacock mating because it ensures that no unnecessary time or energy will be wasted on someone unworthy.

When are Peahens most Receptive to Mating?

Peahens are most receptive to mating in the morning.

Peahens are most receptive to mating in the morning. Peacocks can not have sex until their train of feathers has fully grown back after he molts, which usually takes about six months.

Mating typically occurs in months that are warm. The breeding season for peacocks varies depending on their environment, but they breed around the same time as many other birds.

The mating season lasts from March to June and can extend into July or August if food is abundant during this period of time. This means it may be possible for peacocks to mate twice in one season.

Jump To What Sounds and Calls do Peacocks make? What do they mean?

Peacock courtship can be seen as a form of Intrasexual Competition for mates.

The bright colors of the peacock’s tail, also known as a train, signify their fitness and health to potential mates. This is advantageous in courtship because it allows for females to select males based on quality rather than quantity; not all-male peacocks are brightly colored.

However, there exists an alternative explanation for this behavior that focuses on the idea of honest signaling. Since peacocks are able to survive for many years, they must have high-quality genes that make them desirable as mates. The tail is a marker or indicator of their fitness because only healthy peacocks can produce large tails with bright colors and maintain them throughout time without becoming too heavy to support.

Do the Males incubate the Peacock’s Eggs?

No, the females incubate their own eggs. In lek mating systems such as that of peacocks and other birds displaying in a group, it is the male who takes care of their offspring by protecting them from predators and keeping an eye out for food which they can take to cover when brooding. The male also provides the nesting site by clearing out space and building a nest, usually on the ground.

Females, on the other hand, are responsible for laying and incubating their own eggs. They also act as caretakers to their offspring playing an important role in raising them until they can survive on their own or until it is time to breed again. A female peacock will lay six eggs at a time but only one of these eggs is actually fertilized. The rest of the eggs laid are infertile and it is believed that this serves as a way to increase the chances of their only fertilized egg surviving while also giving them an extra set of eyes watching out for predators, food, or anything else they might need assistance with.

In summary, there is not a specific gender selection for either role during peacock mating. Females lay their own eggs and care for them until they are ready to be raised on their own, while the male provides protection from predators as well as food when needed by his family.