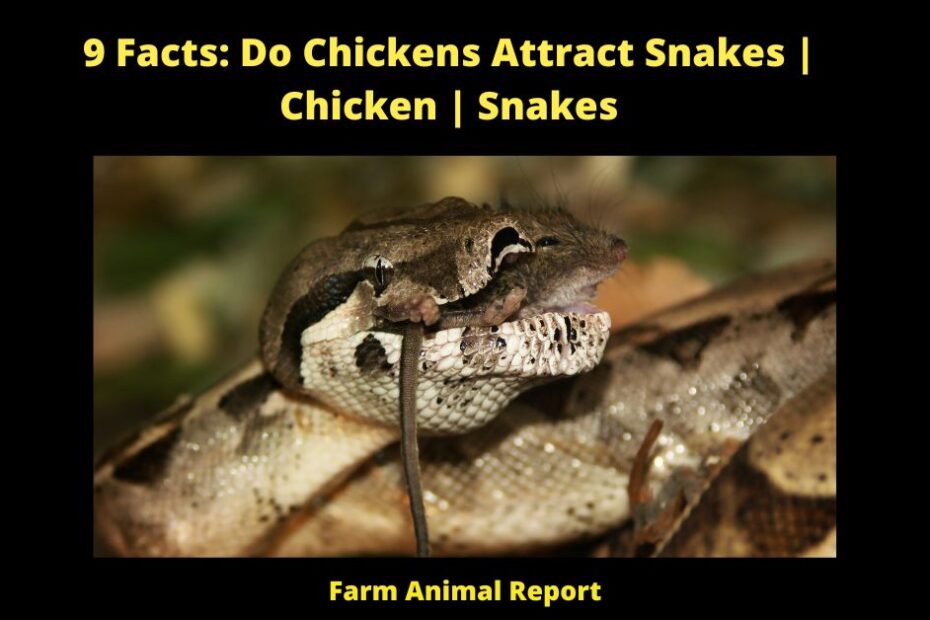 No Chickens do not attract but their feed can attract rodents, mice, and rats that are the main part of a snake’s Diet. On Occasional times large enough snakes can eat a chicken egg. Chickens are often touted as one of the best animals to have around the homestead. They provide delicious eggs and meat, and their droppings can be used as fertilizer. However, some people believe that chickens also attract snakes.

As a result, it is important to take measures to keep your chicken coop snake-proof. But in general, having chickens will not necessarily lead to an increase in the number of snakes around your property.

Chickens are a common source of food in many parts of the world. They are relatively easy to keep and provide a good source of protein. However, chickens can also attract snakes. This is because chicken feed attracts rodents. rodents are a favorite food of snakes, so if there are chickens around, there is a good chance that snakes will also be present.

Chickens can also provide shelter for snakes. This is because their coops offer a warm and dry place for snakes to hide from the sun and predators. For these reasons, it is important to be aware of the potential for attracting snakes when keeping chickens.

What is a Snakes Diet?

The main items in a snake’s diet are rodents, birds, lizards, and amphibians. Snakes will also eat insects, but they are not a major part of their diet.

When Will Chickens Attack a Snake?

Chickens are interesting creatures. Though they are typically quite docile, there are times when they can act aggressively, even attacking snakes. So, when will chickens attack a snake? There are a few different scenarios that can trigger this behavior.

Finally, chickens may also attack if they simply feel threatened or scared. In short, there is no one answer to the question of when chickens will attack a snake. It depends on the individual chicken and the situation at hand.

Are Snakes Attracted to Chicken eggs?

Generally they are not, they will eat bird eggs, which are smaller but on occassion will eat chicken eggs. are not attracted to chicken eggs. In fact, they have no interest in them whatsoever. chickens and snakes have different diets and different preferences when it comes to food. chickens eat seeds, insects, and other small animals, while snakes typically eat rodents or birds.

Chickens are not natural predators of snakes, but that does not mean that they will not eat them if given the opportunity. Chickens are omnivores, which means that they will eat both plants and animals. In the wild, chickens typically eat insects, small lizards, and other small prey.

What types of Snakes can Eat Chicken Eggs?

There are many different types of snakes that can eat chicken eggs. One of the most common is the rat snake. Rat snakes are found all over the world and come in a variety of colors, including black, brown, and gray.

They typically grow to be about four feet long and have a slender body with a pointed head. Rat snakes are non-venomous and kill their prey by constriction. Another type of snake that can eat chicken eggs is the king cobra.

The king cobra is the largest venomous snake in the world, reaching lengths of up to 18 feet. It is native to Asia and Africa and is easily recognizable by its large size and distinctive hood. King cobras are highly venomous and kill their prey by injecting them with neurotoxic venom. Finally, another type of snake that can eat chicken eggs is the diamondback rattlesnake.

The diamondback rattlesnake is a venomous snake found in North America. It gets its name from the diamond-shaped patterns on its back and the rattle at the end of its tail. Diamondback rattlesnakes typically grow to be about four feet long and are brown or gray in color with light-colored bands around their body.

5 Steps – How to Snake Proof a Chicken Coop?

1. Inspect your chicken coop for any openings that a snake could potentially get through. If you find any holes, seal them up with some metal mesh or wire.

2. Install a snake-proof fence around your chicken coop. This fence should be at least 2 feet high and have a tight-fitting gate.

3. Make sure that your chicken coop is in a location that is not ideal for snakes. Snakes prefer to live in dark, moist areas, so try to pick a spot for your coop that is as dry and sunny as possible.

4. Keep the area around your chicken coop clean of debris and brush. This will help to reduce the number of places that snakes can hide.

5. Regularly monitor the area around your chicken coop for snakes. If you see any snakes, take steps to remove them from the area immediately.

What Types of Snake are commonly found in the United States in Chicken Coops?

There are many different types of snakes that can be found in chicken coops in the United States. Some of the most common include garter snakes, rat snakes, and corn snakes.

Each of these species has its own unique set of behaviors and preferences, but all of them pose a serious threat to chickens. Garter snakes are some of the most common predators of chickens in the United States. These slender reptiles can grow up to three feet in length, and they are typically dark-colored with distinctive stripes running down their sides.

Rat snakes are another type of snake that commonly preys on chickens. These reptiles can grow up to six feet in length and are typically brown or gray in color. Corn snakes are a type of snake that is often kept as a pet, but they can also be found in chicken coops. These reptiles typically have brightly-colored patterns on their skin and can grow up to four feet in length

What Types of Snake are commonly found in the United Kingdom in Chicken Coops?

In the United Kingdom, there are several types of snakes that are commonly found in chicken coops. The most common type is the European grass snake, which is also known as the common snake or ringsnake.

This snake is nonvenomous and typically has a brown or greenish-brown body with black spots. Another common type of snake found in chicken coops is the viper, which is a venomous snake with a triangular head and a brown or gray body.

Both of these types of snakes are often attracted to the warm temperatures and prey that can be found in chicken coops. As a result, it is important to be aware of these snakes and take precautions to avoid them.

What Types of Snake are commonly found in Australia in Chicken Coops?

There are many types of snakes that can be found in chicken coops in Australia. The most common type is the brown snake, which is often found in the southern part of the country. These snakes are not venomous, but they can be aggressive if they feel threatened.

Another common type of snake is the black snake, which is found in the northern part of Australia. These snakes are also not venomous, but they can be dangerous if they feel threatened. Finally, there are also pythons and sea snakes, which are both venomous and can be found in any part of Australia. If you see any of these snakes in your chicken coop, it is important to contact a professional snake catcher to remove them safely.

Why do chickens attract Rodents?

Chickens are a common sight on many farms, and they play an important role in the production of food. However, chickens can also be a major source of pest problems, attracting rodents such as rats and mice. There are several reasons why chickens are so attractive to rodents.

First of all, chickens are a source of food for rodents. Rodents are attracted to the grain that chickens eat, as well as the insects that pick up while foraging. In addition, chickens provide shelter for rodents, who can build their nests in the warm, dry environment beneath chicken coops.

Finally, the presence of chickens can mask the scent of rodent predators, making it easier for rodents to thrive in an area. As a result, farmers need to be vigilant in taking steps to prevent rodents from getting access to their chicken coops. Otherwise, they may find themselves dealing with a serious infestation.

What Snake Repellent is safe for Chickens?

There are a few different types of snake repellent that you can use around your chicken coop, but it’s important to choose one that is safe for both chickens and snakes.

One popular choice is a essential oil-based repellent.

These repellents usually contain a combination of

which are all known to be effective at deterring snakes. You can apply the repellent directly to the perimeter of your coop, or you can soak some cotton balls in the mixture and place them around the area.

Another option is to use a commercial snake repellent powder or granules.

These products typically contain naphthalene or sulfur, which can be irritating to both chickens and snakes. As with the essential oil repellents, you’ll want to apply them around the perimeter of your coop.

Finally, you can try planting certain plants that snakes don’t like near your coop. Some good options include marigolds, lemongrass, and catnip. By taking these steps, you can help keep snakes away from your chickens – and your property!

What Animals Keep Snakes Away?

Farm animals can be good at keeping snakes away because they are potential food for the snakes. Chickens, for example, will often peck at and kill snakes. Ducks and geese will also attack snakes. Even a goose can seriously injure a snake with its powerful beak.

In addition, farm animals make a lot of noise, which can scare away snakes. Cows and pigs will hoot and grunt, while sheep and goats will bleat. The constant noise can make it difficult for snakes to lurk around without being detected.

Chickens do not attract Snakes, but chicken feed attracts rodents, which in turn attracts snakes. You can use a variety of methods to keep snakes away from your chicken coop, including using snake repellent and planting certain plants around the perimeter. Farm animals can also be effective at deterring snakes, as they make noise and produce a strong smell that snakes don’t like.

Snakes are not usually attracted to a Chicken coop because the chickens.