How Long are Goats Pregnant? 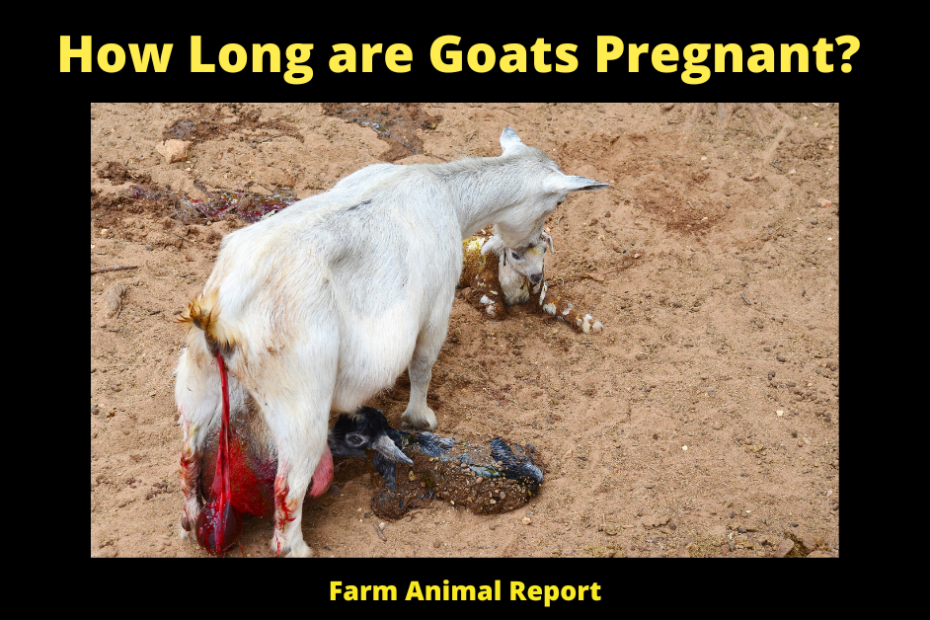 Do you have a pregnant goat on your farm? If so, how long until she delivers her kid(s)? Goat Owners say Goats are typically pregnant for 145-155 days. In this blog post, we will discuss the signs that your goat is about to give birth, as well as the delivery process itself. We will also provide some tips for caring for a newborn goat.

How Long are Goats Pregnant?

How long are goats pregnant? The average gestation period is about 150 days. Farmers have been known to deliver a goat that is only 145 days old, but this is not common. Most farmers will breed theirs does (female goats) so that they kid (give birth) in the spring when the grass is growing best.

This means that the doe will be pregnant during the late summer and winter. Some folks worry that the cold weather will hurt the kids (baby goats), but as long as the doe has good shelter and plenty of hay to eat, she and her kids will be just fine. In fact, many farmers believe that kidding in the winter actually makes for healthier kids. How Long are Goats Pregnant?

They are less likely to pick up parasites from the pasture, and they seem to grow a little better when they are born in colder weather. So, if you’re ever curious about how long goats are pregnant, just remember: about 150 days, give or take a few. And if you see a kid born in the middle of winter, don’t be surprised – it’s actually quite normal!

At What Age Can A female Goat Begin her Breeding cycle for the first time?

The heat cycle of a doe usually begins when she is between four and twelve months old, with six to eight months being average. Does may have their first kidding as young as five or six months of age, although seven to nine months is more usual.

Bucks (intact males) come into a rut (the breeding season) in the fall as with the does’ heat cycles. bucks of equatorial breeds may show seasonal reduced fertility, but as with the does are capable of breeding at all times.

Rut is characterized by a decrease in appetite and obsessive interest in the does. A buck in rut will display flehmen lip curling and will urinate on his forelegs and face. Sebaceous scent glands at the base

What are some signs that a goat is about to give birth?

A Dairy goat will generally show symptoms of kidding (giving birth) about 24 hours before labor begins. These symptoms include restlessness, a sunken area around the tail and hip, heavy breathing, and a worried look. Might lay on her Right Side. She may have a high temperature, which might be some of the signs of labor.

How many kids will a goat typically have?

The average litter size for goats is two, with twins being the most common. However, single and triplet births are not uncommon. Less frequent are litters of quadruplet, quintuplet, and even sextuplet kids. Birthing, known as kidding, generally occurs uneventfully. Just before kidding, the doe will have a sunken area around the tail and hip, as well as heavy breathing.

She may have a worried look, become restless, and display great affection for her keeper. The mother often eats the placenta, which gives her much-needed nutrients, helps stanch her bleeding, and parallels the behavior of wild herbivores, such as deer, to reduce the lure of the birth scent for predators.

After kidding, the doe will generally have a decreased appetite and may even stop eating altogether for 12 to 24 hours as she recovers from the birth. It is important that she have access to fresh water during this time. Her udder will also begin to fill with milk during this period.

How many kids will a goat typically have in Her Lifetime?

An average goat lives 12 to 14 years, with does often living longer than bucks. With good care, a doe can produce kids for 12 or more years. However, by the time a doe is six or seven years old, her production will generally start to decline.

Goat’s Pregnancy is not very dependent on the breed.

What are some of the common problems that can occur during kidding?

The most common problem that goat breeders have seen that can occur during kidding is dystocia, which is when the doe is unable to deliver the kid or goat kids on her own. This can happen for a number of reasons, such as the size of the kid or kids, the position of the kid or kids in the birth canal, or if the mother is a first-time mom.

If dystocia occurs, it is important to contact your veterinarian immediately as it can be a life-threatening situation for both the doe and her offspring.

Other problems that can occur during kidding include premature rupture of membranes, which is when the water bag breaks before labor begins, and prolapse of the uterus, which is when the organ that holds the fetus in place during pregnancy slips out of position. Both of these problems can also be life-threatening and require immediate veterinary care.

What are some things that you can do to help

What are some things you should do after your goat gives birth?

After your goat gives birth, it is important to give her a clean, dry place to recover. This area should be away from drafts and other animals.

You should also check her udder for any sign of mastitis, which is an infection of the milk-producing glands. If you see any redness or swelling, contact your veterinarian immediately. It is also important to check the kids for any signs of problems, such as weakness, difficulty breathing, or a lack of coordination.

If you see any of these signs, contact your veterinarian immediately. Finally, you should offer the doe fresh water and hay. She may not have much of an appetite at first, but it is important that she has access to food and water.

What is a Nanny Goat?

The nanny goat is a female goat that is used for milk production. Nanny goats, Dairy goats, are usually kept on farms and are milked by hand. They are also often used to provide milk for children and the elderly.

Nanny goats typically have two breasts, which produce milk that is high in fat and protein. The milk is also rich in calcium, phosphorus, and vitamin A. Nanny goats are generally gentle and easy to handle, making them a popular choice for farm animals.

Nanny goats come in many different breeds, colors, and sizes, but all have certain characteristics in common. They’re agile and surefooted, with narrow bodies and long legs. Their coats are often thick and lustrous, and their horns can be either spiraled or straight.

Nanny goats are intelligent and sociable animals, and they make excellent pets. If you’re thinking of adding a nanny goat to your farm or homestead, be sure to do your research and choose a breed that’s well-suited to your climate and needs.

Goats reach sexual maturity between four and twelve months of age, depending on the breed. Does will usually have their first time kidding when they are between one and three years old. The gestation length, the period for goats is approximately 150 days. So, how long are goats pregnant? Goat pregnancy for about five months.