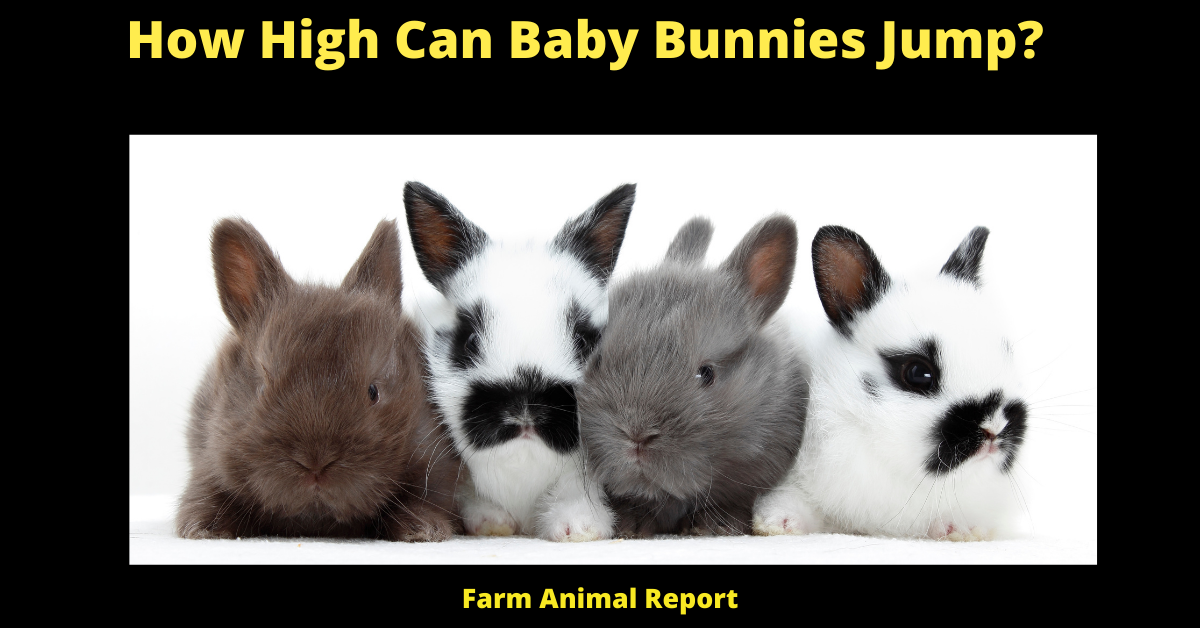 How High Can Baby Bunnies Jump?

As a General Rule Newborn Bunnies cannot jump, They begin growing fur around two to three weeks old. They open their eyes at two and a half weeks, and they start growing teeth by the third week of life. At four weeks is when they begin hopping around and can now go outside with mom and explore. Adult bunnies are able to jump up to two feet in height! They use their back legs to propel themselves into the air, and they land on all fours before jumping again. The average bunny can jump about 10 times its own body length from a standing position.

How high can baby bunnies jump? This is a question that has been asked by many people, and the answer may surprise you. They have strong hindquarters that enable them to leap great distances using their powerful hips as well as their long rear legs which provide strength and balance.

1. When a Baby Bunny is Born, it Weighs less than an Ounce.

When a baby bunny is born, it weighs less than an ounce. They are blind and deaf when they first enter the world, and their ears do not open for another week. The average weight of a newborn bunny is 0.07 ounces (that’s about two grams) with adult rabbits weighing between one and three pounds on average.

They Grow quickly gaining weight and size; usually, they double their birth weight within the first week of life. By one month old, baby bunnies are capable of feeding themselves. Bunnies reach sexual maturity between four to six months old (but can become pregnant at just three months). At around eight weeks old, bunnies are able to leave their mother, but they stay in the nest for another week or two before venturing off on their own.

A newborn baby rabbit cannot get out of the nest box alone until they are a few weeks old, and it can take up to two months for them to develop their full strength as well as coordination. They require constant care from an early age so that they grow into healthy adults who will repay your kindness with sweet affection and companionship.

A Baby rabbit that gets away from the nest box, and the Does Fur, can be fatal to the baby rabbit.

2. Baby Bunnies are Born without Fur and their Ears and Eyes are Closed

Baby bunnies are born without fur and their ears and eyes are closed. When a baby bunny is born, it weighs less than an ounce. They are blind and deaf when they first enter the world, and their ears do not open for another week.

Newborns cannot Jump, they can wiggle and run on their own. A baby bunny cannot be getting out of the nest box alone until they are a few weeks old, They spend their time eating, sleeping, and growing very quickly. Newborns are pink, but their true color begins to develop in about a week.

This is why House Bunny’s must be kept indoors for several weeks after birth so the babies can grow strong and healthy before they begin exploring outside of the nest box. The House Bunnies will take care of them until then!

They begin growing fur around two to three weeks old. They open their eyes at two and a half weeks, and they start growing teeth by the third week of life. At four weeks is when they begin hopping around and can now go outside with mom and explore!

4. A Bunny Jumps about 2 Feet High when it’s Full Grown!

When building a rabbit hutch and making your rabbit run you need to factor in the size of your rabbit.

Unfortunately, many rabbits are kept in hutches that are too small to allow them any room for exercise or even turn around. A single bunny should have a hutch at least six times its length with an additional two feet added on each side if it is going to be housed near another rabbit – so basically you need a hutch that is at least 12 times the length of your rabbit, and this needs to be factored in with its run.

You should allow six feet for each additional rabbit in cage or yard space if housed together – so two rabbits need an 18 foot by six-foot area (this means you will have three feet on either side when you set it up).

The rabbit should have at least two hours of exercise outside their cage or hutch daily, and that time must be supervised by an adult. Otherwise, your rabbit may become frustrated because they are not getting enough exercise while you aren’t there to supervise them! The more effort you put

This should be a minimum of four feet high, but six-foot will be better. Use a mesh type material or welded wire so the rabbit cannot get out and predators can’t get in

Rabbits like to dig and burrow that is why you need to bury the bottom of the fence – otherwise they will escape.

Rabbits will fight if they are in the same hutch or cage together because male bunnies can become quite territorial. Hormonal changes also make it harder for female rabbits to get through pregnancies and give their young a higher chance of dying (this is very painful). Thus, you should separate them into different areas for this time.

A) Bunnies are, at their core, prey animals. While they can be domesticated over time (even indoor rabbits), it is important to keep in mind that there may always be a bit of wildness about them—especially if you have an outdoor rabbit! These instincts never fully leave them and so they need to live in a way that ensures their safety and well-being. The best place for a bunny is in an enclosure outside, with room to roam and explore as they would in the wild!

B) This means you should never leave them unsupervised around other animals (even those who seem friendly). A rabbit’s natural instinct will be to flee from a predator and it is a rabbit’s nature to hide from danger. This means that even if you think your bunny will be safe with the family dog, he or she may not understand that they are friends! The opposite can also be true—if you have dogs who live outside, rabbits should never come into contact with them either because their instincts tell them that they are a predator as well.

C) In addition to being prey animals, rabbits have very sensitive natures and so it is important to keep the noise levels down in your home. Loud music or shouting can stress them out, as can sudden movements from those who aren’t used to dealing with these little creatures on a daily basis. It can take months (and sometimes years) for a bunny to adjust to his or her new home, so it is important that everyone living in the house—humans, and animals alike!—are on board with their presence.

How High can Dwarf Bunnies Jump?

Dwarf bunnies are known for their jumping ability. They can jump up to two feet in the air or six feet lengthwise.

Baby Bunny’s are born without fur and their ears and eyes are closed. They can jump up to two feet in the air or six lengthwise. When providing a safe place for your bunnies ensure you have at least four-foot fencing with mesh material or welded wire so they cannot get out and predators can’t get in buried into the ground so they cannot escape.

If you have both male and female rabbits separate them during mating season so they do not fight because males can be territorial. Make sure to keep noise levels down in your home for bunnies sensitive nature, loud music or shouting along with sudden movements from those who aren’t used to dealing with these little creatures on a daily basis